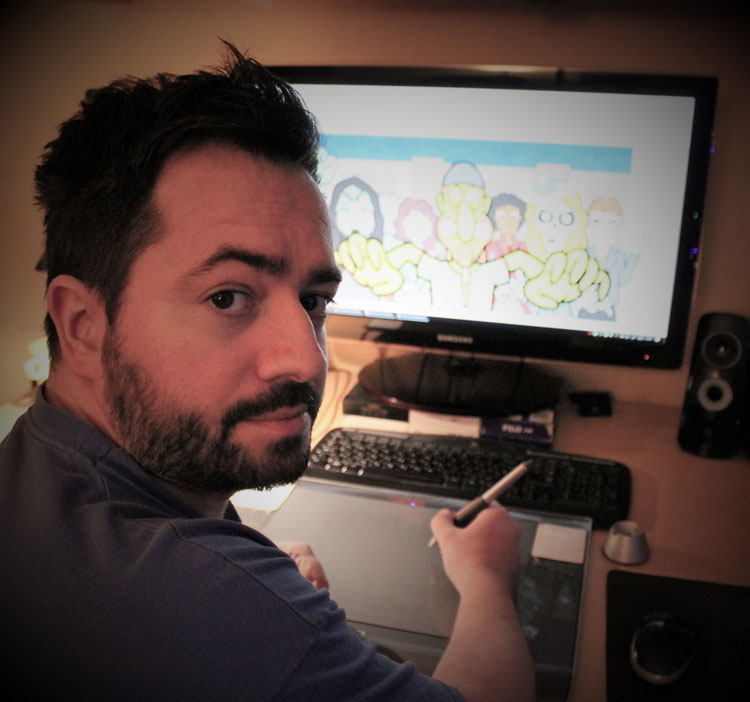 Balázs Gróf is a cartoonist and animator, born and working in Hungary, Europe. He graduated from the University of Pécs, Faculty of Fine Arts. Lately, he has worked with American rock star/movie director Rob Zombie on several animated projects. He made the animated music video for the song “Shake Your Ass-Smoke Your Grass” , which won the award for “best animation” at the 2022 Hungarian Music Video Awards. He also made the mini-series “Zombie Interviews Zombie” and additional animations for the 2022 feature film “The Munsters”. In 2020, he made animated music videos for American pop culture icon William Shatner of Star Trek fame, legendary Indian violinist L. Shankar and Bay Area thrash masters Testament. In recent years, he worked for internationally acclaimed American bands like Florida death metal legends Obituary, Portland beer can rockers Red Fang, LA punk rockers Down By Law and LA rap metal supergroup Powerflo and up-and-coming acts from all over the world. North America’s leading hard-rock & metal media Revolver Magazine featured both of his animated music videos made in 2017 on its “15 best music videos of 2017” list, alongside videos of artists like Marilyn Manson, Queens Of The Stone Age and Mastodon. Balázs has been one of the most prolific comic strip artists of his country since his first comic was published in 1996. His commissions include animated music videos, animated TV commercials and shorts, viral videos for social media, custom caricature portraits as well as designs for record and book covers or T-shirts.

Chuck Billy of TESTAMENT on working with Balázs Gróf

Billy Graziadei of POWERFLO on working with Balázs Gróf

Donald Tardy of OBITUARY on working with Balázs Gróf

Donald Tardy of OBITUARY on working with Balázs Gróf